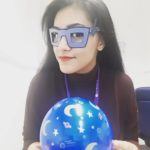 Found some spare time to answer all these insightful and fun questions!